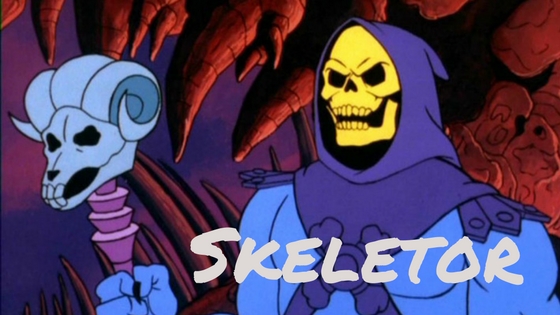 I figure it's time to go back to one of the biggest villains from the 80's - Skeletor.  This skull-faced bad guy is probably responsible for some of my nightmares as a kid.  I mean, look at him - even his Havoc Staff is a skull!  Even that cackle of his was spine-chilling.  Okay no more bone jokes.

Skeletor was He-Man's mortal enemy on Masters of the Universe, a role he played with gusto.  I loved watching this guy work, especially since his powers were different in every episode.  Sure there was different spells he could cast that each story focused on - illusion spells, mind-control, that kind of stuff - but between episodes, he could fire blasts with his staff that had so many random effects.

My other favorite thing was how he treated his henchmen.  He was king of trash-talking the people that worked for him.  Not Cobra Commander, not Megatron, not the Shredder topped his ability to completely destroy his subordinates with colorful insults.  I mean, I felt bad for Beastman and Merman for all the shit they took from Skeletor.  Only Evil-Lyn could really stand up to him and it wasn't that often that she did.  But the others?  Skeletor was brutal.

Unfortunately, his skills weren't up to snuff when He-Man showed up.  Skeletor's plans were never that great, most of them involved making him look like some important person and sneaking around or causing two people to bicker until He-Man showed up and Skeletor wussed out and ran away.  His track record was terribly lopsided.  I do remember one episode when he not only defeated He-Man but broke him.  In The Problem with Power, Skeletor employed a goblin without a heart to disguise as a human and fake his death, making He-Man think he had killed an innocent bystander.  Disgraced, He-Man changes back into Prince Adam (I think the only time it's shown how he does it, stating "Let the power return.") and throws the sword in the pit around Castle Grayskull.  Of course, Orko ruins his plan, like everything else, but to me, this was the closest Skeletor had ever gotten to defeating his enemy.  The plan was much darker than many of the time and was the first time an on-screen death (even a fake one), had been portrayed in a Saturday morning cartoon.  Too bad they couldn't all be like that.

Skeletor's end-game usually switched between taking over Eternia from King Randor or getting into Castle Grayskull to learn the secrets of the ancients.  He originally got his magic by working under Hordak, who worked for the Horde. Which makes me sad that She-Ra's villain was supposedly worse than He-Man's, something I will never agree with.

I have always liked Skeletor and found him to be an enjoyable bad guy to watch.  But let's get to the ratings.  Thankfully, I'm fairly familiar with Skeletor, having watched the cartoon a lot as a kid and more recently on Netflix, so I have a better idea of how to grade him.  Coolness - 7.  Even in Filmation's lesser detailed animation models, Skeletor looked bad-ass.  The hooded skull with the black background, eyes sometimes growing red when they weren't just empty voids - this was the look of a real scary dude.
Effectiveness - 2.  There's a reason that Robot Chicken mocks this guy mercilessly.  He's a joke.  If the episode mentioned above had never been produced, he would be a 1.  His plans were always ridiculously simple and used the least amount of effort to come up with.  A bad guy can also only be as good as his minions and Skeletor didn't have a lot to work with either.  Only Evil-Lyn was up to snuff and she worked against Skeletor as much as with him.

I want to speak a bit about the series reboot in 2003.  I actually enjoyed this show for the amount of drama it interjected into the material while also keeping it as close as possible to the original work.  The play off the intro's narration and the PSAs as the end were great homages.  The big change here was Skeletor's origin, making him Keldor who was turned into Skeletor by Hordak after an attack using acid was splashed back into his face. For some reason, I was always under the impression that Keldor was Randor's brother, but it was never mentioned within the cartoon itself.