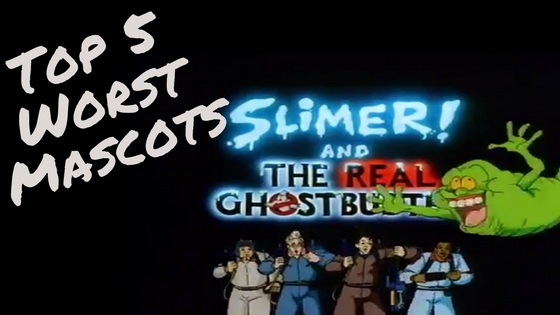 The mascot: a character in a cartoon that isn't specifically on the team of the good guys, but follows them along, sometimes helping out, but just as often causing or worsening a problem the good guys are dealing with.  Created to be something the younger viewers would latch on to in a cartoon, the writers frequently overdo their ticks and habits to make them into annoying sidekicks that everyone wished weren't there.  These characters were never human (or human-like if the show wasn't based on earth) but some of them could speak, though we often wished they couldn't.  Often times they were created for comic relief, but considering the antics of the villains could easily fill that role, these characters just weren't necessary.


Today we're going to look at the top five worst mascot characters based on 3 criteria: how much are they involved with the good guys, how often do they screw things up, and how annoying do they sound.  Even though the first two criteria are pretty important to the story, I feel like the last one is the most damning of all.


Before we begin, I wanted to give an honorable mention to Slimer from The Real Ghostbuster. I really liked Slimer in the beginning of the series, but as it went on and he was shoe-horned into more episodes, he started grating on my nerves.  Then finally, the show was expanded to an hour with Silmer getting top billing and his own shorts.  Hearing his whining over the theme song, culminating with the "And me! And me!" at the end made my blood boil.  If it weren't for the early episodes where he just annoyed Venkman, he would be near the top of my list.  Still, there are worse mascots and that should really tell you something. 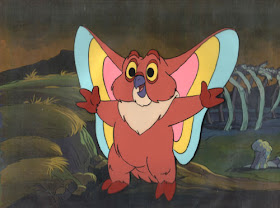 5. Kowl
Bow's companion in She-Ra was a far stretch from his Eternian counterpart (more on him later).  Cowl was a butterfly/owl combination of a sort, and didn't really do much of anything in the cartoon besides make a lot of quips towards Bow, which won some points with me because Bow's one of the worst characters in the show. 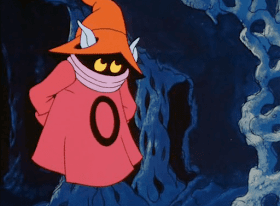 4. Orko
Everyone should have known he was on this list, but I'm sure his placement near the bottom is a surprise.  Orko's biggest problem was how often he caused problems for Man-at-Arms.  His magic spells constantly went wrong with "hilarious" results, but pretty often his bumbling caused series issues for the Masters, such as sending Prince Adam's power sword into the past.  Other times, he's been able to help He-Man, and in truth, is one of the only characters to know his secret.  Orko speaks English as well as the other characters in the show, even if it's a bit exaggerated or overly-enthusiastic. 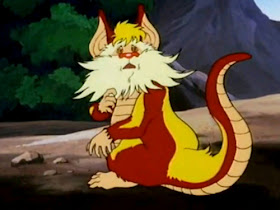 3. Snarf
If Orko makes the list, then of course Snarf will.  Snarf appeared as Lion-o's caretaker while he was a kid at the very beginning of the Thundercats and for some reason never gave up on that doting mother shtick.  Look, Lion-o's buff as hell, he's the freakin' leader of the Thundercats, he doesn't need some cat lizard running around taking care of him.  To top it off, he had the most obnoxious habit of saying his own name all the time.  I don't have to tell you why that was annoying as hell. 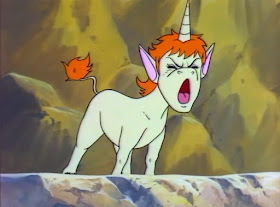 2. Uni
I feel the need to start this one off with how much I love Frank Welker.  Basically, if you've heard any kind of animal noise in a cartoon, it was provided by Mr. Welker.  And while I appreciate a lot of it, that baby unicorn from Dungeons & Dragons is not one of those times.  Uni is one of the rare animal mascots that can't actually speak English, and while that frees us from hearing a weird accent or annoying speech pattern, instead we were assaulted with a ton of panicked bleating that got on your nerves after less than a second.  To illustrate how irritating it is, when I was watching the show, every time Uni would cry out, my wife thought our baby was throwing a fit. 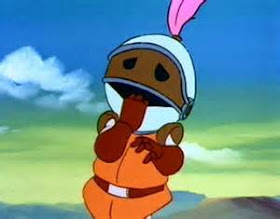 1. Oon
You know it's bad when from a show that has three mascots, you're the worst one - Jayce and the Wheeled Warriors has multiple mascots, including a flying fish that kinda makes bubbly sounds, three little robot lizard things that just get in the way, and Oon, a miniscule talking set of armor.  I hate this guy with a passion; always boasting about his magic lance, but cowering at the first sign of a Monster Mind.  He's so far out of his league and he knows it.  He supposedly was the protector of Jayce's father and we all know now how he got captured.  Too bad he trusted his safety to a hunk of junk like Oon.