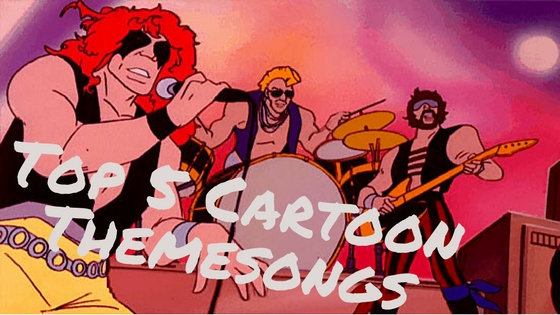 There's something about a kick-ass cartoon theme song that will just get stuck in your head and stay there your whole life.  A few notes is all you need to bring you back to the days you watched those cartoons and you'll catch yourself drumming along to the rhythm or cranking out a line or two.  With that, I present to you my favorites.

Special thanks to Rediscover the 80s and Banzai Retro Club for the argument on Twitter that inspired this list.  I'm sure they'll have a lot to say about it.

Honorable mention 1 - GI Joe: The Movie
This version of the GI Joe cartoon intro is probably one of the coolest things to ever attack my eardrums.  The "Cobra!  Cobra!" sections are my favorite part - when do the villains of the shows get their own reprise? The only reason this isn't making it on to the list is that it only shows up in the movie (as far as I know, correct me if I'm wrong).  Of course, if it showed up in the series, it would cut too far into the episode, right?

Honorable mention 2 - The Raccoons
I've never watched the Raccoons and judging by the snippets I've seen, I don't think I want to.  But what business it has having a outro theme like Run with Us, I don't know.  This song is great and I think it's my favorite Cybertronic Spree cover - even over The Touch and Dare!

Honorable mention 3 - Disney
There's no way to pick the best Disney cartoon theme - they're all fantastic, and super catchy.  Maybe they put the extra money into making the themes that they saved from recycling animation for the intro from random scene in the show.  It always bugged me that they did that, but there's no denying the songs were great.  So how do you pick a favorite?  You don't, and that's why they're not in the top 5.

Without further ado - my favorite themes:

Count Duckula
I know I said skip the narration in the last mention, but don't you dare skip it here.  That Vincent Price-sounding narrator was suitably creepy for the Count part, but I love the disco sounding Duckula half.  "If you're looking for some fun" is totally right.

M.A.S.K.
M-M-M-M.A.S.K!  It starts out slow, but by the time you get to The end of the first verse, it ramps up to some kick-ass levels.  "Working overtime, fighting crime" has to be one of the greatest theme song lyrics.  Too bad I still can't tell what lies behind the... Matt sher rays?

Jayce and the Wheeled Warriors
Lightning strikes!  Okay, it's just fun to shout some of these lines.  I'm glad I don't drive while listening to these tunes or this one would get me a ticket.  It's hard not to get pumped up as the song keeps going.

Adventures of the Galaxy Rangers
No Gut, No Glory.  This song is right at home in the 80s - you could picture it playing in any action flick of the decade.  There's no wonder why this show was on track to get its own soundtrack album.  I'd have bought it in a microsecond.  And it even gets played by the Rangers in one episode!  Sorry, Banzai, this song totally kicks Bionic Six's ass.
Old School Evil at 10:13 PM
Share